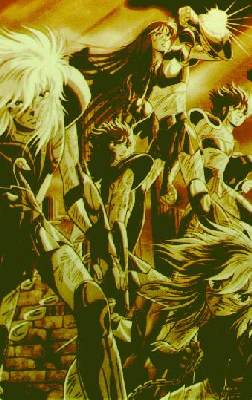 Broadcast starting in 1988 in France, Saint Seiya, alias Les Chevaliers du Zodiaque (The Knights of the Zodiac) there, is one of the greatest successes that the show Club Dorothée ever had. It began a passion for japanese animation in many. Retrospective...

The Most Beautiful Saga of All

Since you can learn the whole story of Saint Seiya by reading other sites on the Web, it's useless to go over it for pages and pages: the plot unfolds in our times (between 1986 and 1988, in fact), in a parallel world which has just gone through a World War and has seen "foundations" appear that reign as masters over entire continents (the Graude foundation, managed by Saori Kido, rules Asia, and that of Julian Solo, for example, rules the Seven Seas). Saori, always herself, is in fact a reincarnation of Athena, who comes back to Earth every 200 years to protect it from Evil. She is aided by her faithful knights (Saints in japanese), who are themselves each protected by a constellation, represented by armor (Cloth) which channels their psychic powers.

There are three ranks of knights: the Gold Knights (the 12 constellations of the zodiac, therefore there are 12 of them and they protect the gate to the twelve temples that are scattered along the road leading to Athena's Sanctuary, in Greece), the Silver Knights, also attached to the Sanctuary, and the Bronze Knights, the weakest, to which rank our heroes belong.

Dying for a just cause

These are named, Seiya of the Pegasus (Seyar in the French version), who will fall in love, bit by bit, with Saori (and it's reciprocal) and who is desperately seeking his sister Seika, Hyôga> of the Swan (whose mother sacrificed herself for him in the past, and who is still deeply traumatised by the memory), who was the student of Camus, the Gold Knight of Aquarius, Shun of Andromeda (the sensitive soul, who is stronger than he lets on), his older brother Ikki of the Phoenix (his personality makes him hide his feelings, but once upon a time he was in love with the daughter of his master, Esmeralda, who was killed by that master to force Ikki to step outside his personal boundaries and find the Force in himself), and Shiryu of the Dragon (student t of the Gold Knight of Libra, the old Dôko), who is secretly in love with the young and pretty Shunrei (we read her name as Chun-li in Chinese, for the fans of Street Fighter 2 !), an orphan recently taken under Dôko's wing. Poor Saori is always getting kidnapped by the Bad Guy of the story. In the first thirteen volumes of the manga, our heroes are confronted by a usurper who tried to kill Saori when she was born and took command of the Sanctuary to everyone's dismay. Saga will finally be defeated, after going through all twelve temples of the Sanctuary, but very soon we're confronted with Poseidon (volumes 14 to 18), then Hades (until number 28), both of which send their respective knights (the Generals of Poseidon and the Specters) to bother our heroes. You can't ever relax. The story ends tragically with the death of Saori and our five knights. But maybe you didn't know that... Really, the saga of Hades, only part of the manga that hasn't been animated yet, deserves a hundred times over to be adapted...

The Manga and the TV series

It was in the very first 1986 issue of the weekly magazine Jump that the character Seiya was born. Drawn and plotted by Masami Kurumada, this manga quickly met with succes, thanks to a few good finds by the author. However the graphics are mediocre, and the plot recalls a bit of a mix of the two previous successes of Kurumada, Fûma no Kojirô and especially Ring ni kakero. An autodidact, the author has been drawing manga for 20 years and his style, even though it has improved over time, is still rather mediocre, especially on the level of the faces which he never varies very much. An animated version produced by Tôei Animation is quickly put together. The first episode, broadcast on October 11, 1986 which covers half of the first issue of the manga, showed a very definite break between the two versions. Production had been entrusted to the great Kôzô Morishita (Cutie Honey, the little mermaid, Dragon Ball Z) and character deisgn to Shingo Araki and Michi Himeno, both known for Lady Oscar, and Ulysses 31 and many other marvels.

Sensitivity and search for the esthetic

As for the composer Seiji Yokoyama, was known in the profession as one of the greatest. Captain Harlock, notably, was his work. He understood everything about the violin or the piano, but also the pianica (piano-harmonica) and the accordion for which he composed unforgettable melodies in Saint Seiya Asgard. His symphonies truly come from another time, another dimension. It's pure emotion. Just like the images from the series ... the revelation, the story-board, the scenario, the production: everything was made to touch a chord in our hearts and draw out as many tears as possible. And it's a success: Saint Seiya holds a choice place in the Pantheon of melodramatic works.

A large number of changes had to be made to the plot in order to get the 28 issues of the manga into 114 episodes, broadcast until the 11th of april 1989. Details were modified (the masters of Hyôga and Shun aren't the same, for example), what's more an entire series was created from scratch by the script writers of the TV version, Takao Koyama and Yoshiyuki Suga, to avoid catching up too quickly to the parallel story in the manga. The 26 episodes of the Asgard saga ( from 74 to 99), far from being the repetitive manicheistic concept found in American cartoons, marked fans by presenting 'bad guys' with ultra-complex psyches, that were so grabbing that one even went so far as to regret that Saori is victorious at the end ! And why did the script writers have to sign their death warrant right from the start, instead of offering them a golden spot beside our knights afterward ...

May the magic be reborn someday

One also notes the cruel absence of a part which concentrates on Hadès . Unfortunately, Bandai chose to stop sponsoring the series at the end of The Poseidon, and rumors about an adaptation in OAV were just ... rumors. The situation is far from being resolved, since the producer of the TV series, Yoshifumi Hatano, just left us in March 1995. Finally, four magnificent medium-length films were drawn from the series between 1987 and 1989. The first three were recently re-edited in the Manga Power collection. Oddly enough, they are all difficult to fit into the TV version. I'll probably tell you all about them another time. A piece of work as heavy as Saint Seiya in the landscape of japanese animation deserves more than just a short introductory article ...

Saint Seiya's lost legend (check out the origins of Athena and her Saints !)

The Courage to Love (an essay about Love in Saint Seiya)

Cyber Namida was created and designed by René-Gilles Deberdt. All rights reserved.